Comments: This was the second leg of our Caribbean trip. We really liked DR – the people were incredibly friendly and the food was very good. Driving was truly terrible though. We rented a car and made sure we had full insurance even though we normally just use our credit card coverage.

Day 1: This was really just a travel day to get from Turks & Caicos to Santo Domingo, Dominican Republic but we couldn’t resist stopping for a few birds on the way to the hotel – managed to pick up Palmchat and Hispaniolan Parakeet very easily just around town. Night at Casas Del XVI.

Day 2: After a nice breakfast in the courtyard of our hotel (accompanied by a Red-legged Thrush!) we braved the traffic in Santo Domingo and drove up to the Botanical Gardens. Excellent birding here. Despite not arriving until after 9.00am we had great views of pretty much all our targets – Hispaniolan Woodpecker, Black-capped Palm-tanager, Hispaniolan Lizard-cuckoo and Antillean Mango. We also got to enjoy a number of migrant warblers and the resident Black-whiskered Vireo. Left around 1pm and had a lazy afternoon. Night at the Casas Del XIV

Day 3: We decided to drive out to Punta Cana for the day and try our luck for Ridgway’s Hawk. It is quite a drive but we didn’t want to stay in such a touristy spot so we were happier doing it this way. When we finally found the Eco-Reserve (see notes below) it was a lovely spot to wander around even in the heat of the day. Our first lifers were several Broad-billed Tody, which were a delight. We then found the tower that looks over the water treatment plant where we had a number of duck species and a distant look at a Ridgway’s Hawk. As we were leaving the reserve someone came over and told us about a hawk that was nesting in the car park of the Westin Hotel so we headed there for lunch and had great views. Night at the Casas Del XIV. 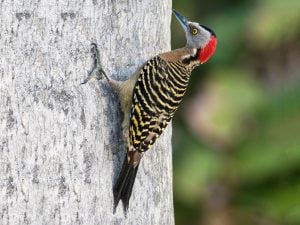 Day 4: We wanted to pick up a few more species before leaving Santo Domingo so drove up to Parque Mirador del Norte where we were hoping for Caribbean Martin. We had a brief glimpse of one on the way up but the park itself was extremely quiet so decided to head back to the Botanical Gardens. Glad we did because we not only got excellent views of the martins but also picked up Hispaniolan Emerald. Vervain Hummingbirds were quite numerous here but that is not a life bird for us. Night at Casas Del XIV.

Day 5: Nice easy breakfast in our courtyard and then it was out for the drive to Barahona. Arrived in our hotel around 2pm in time for lunch and then relaxed. A walk around the garden later in the afternoon gave us our only view of Hispaniolan Oriole. Night at Casa Bonita Tropical Lodge. 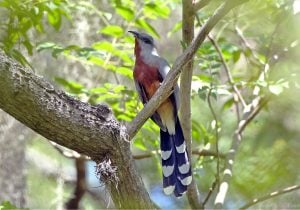 Day 6: Our guiding company picked us up at 6am and we drove up to Puerta Escondido where we collected our local guide (Rafael). As we entered the national park we turned right and drove about 15 minutes to a very specific site that Rafael knew. We spent several hours here and picked up all the target species- Hispaniolan Pewee, Green-tailed Warbler, Antillean Piculet, Flat-billed Vireo, Bay-breasted Cuckoo and Ruddy Quail-dove. It was then time to go in search of White-necked Crow – which Rafael heard within seconds of getting out of the car and we enjoyed views of a large flock in the palm trees. Then it was lunch at Villa Barancolli (Kate Wallace’s place) and a couple of hours to relax during the heat of the day. Then around 3.30 pm we started to walk the Cabo de Gato road. Our first lifer was Antillean Euphonia quite quickly followed by Key West Quail-dove and White-fronted Quail-dove. It was a long but great day!!! Night at Casa Bonita Tropical Lodge. 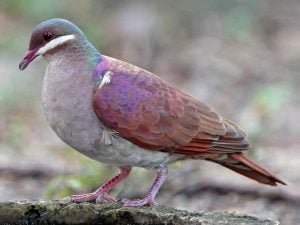 Day 7: After our long day yesterday, this was about relaxing by the pool and catching up on emails. Night at Casa Bonita Tropical Lodge.

Day 8: Today we were picked up at 5am! And drove out towards Perdinales. Our birding spot today was the Aceitillar area of the Sierra de Bahoruco National Park. We had a different guide today and he really knew is stuff – Cesar immediately located Hispaniolan Palm-crow as we got out of the car, quickly followed by Greater Antillean Elaenia. We walked a short stretch of road for an hour or so and added Plain Pigeon, Hispaniolan Siskin, Hispaniolan Crossbill and the local resident sub-species of the Pine Warbler. Then a short drive back down the road to an old bauxite quarry where some Golden swallows are regular visitors and some nest. We waited quite a while but then about a dozen flew in and down into the quarry so we could see their golden 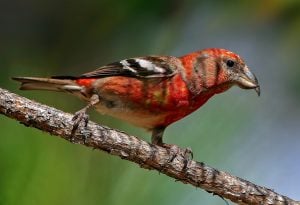 backs. Back down to the lowlands for lunch at a great beach-side restaurant (Rancho Typica in Cabo Rojo) which gave us an opportunity to stop on the way for great views of American Flamingo. Night at Casa Bonita Tropical Lodge.

Day 9: After such a long day yesterday, this was another R&R day – we are really enjoying a more relaxed pace to our birding these days!

Day 10: Our guides met us at 4.45 am and we started the long bumpy ride up to Cachote. A stop on the way up for Ashy-faced Owl was disappointing because we heard it and it flew over us but we didn’t get good enough views to count it. Then it was to the top where it was dark, cloudy and raining and our guide didn’t have binoculars, laser pointer or play back!!!!! Luckily, we were

able to connect to xeno-canto so all was not completely lost. After a frustrating start we managed Eastern Chat-tanager, Hispaniolan Spindalis, Hispaniolan Trogon and Bicknell’s Thrush. Headed back down for lunch because our only other target, White-winged Warbler was a long shot and was nowhere to be seen.

Day 11: Travel day as we drove back to Santo Domingo and caught a flight to San Juan, Puerto Rico.

Casa Bonita Tropical Lodge – this is probably the best hotel in the area but don’t buy into the ‘Small Luxury Hotels’ designation. The pool and restaurant are great but the rooms are tired.

Kate Wallace from Tody Tours has written an excellent book on where to find the birds in DR – she assures me you can buy it online but I have not been able to find it but it is worth getting so maybe email her if you are interested.

This was easy birding and it didn’t seem to matter that it didn’t open until 9.00am. The most important thing was to avoid the crowds. We entered and headed across the area with water, slight left, and then straight ahead to a road that took us all through the park.

As we went about 75 yards down this path we came to an intersection where there were a number of flowering plants on the right – this was fantastic for Antillean Mango.

The woodpeckers were literally everywhere and the lizard-cuckoo was heard frequently and responded to play back. Palmchats are overwhelming and Black-crowned Palm-Tanager was fairly easy as well.

We got Vervain Hummingbird and Hispaniolan Emerald at several spots in the park.

This is a challenging place to find because google maps takes you to the wrong place. It is actually inside the Punta Cana Resort & Club. Once you enter follow the sign for the reserve but you want to stop at the Foundation building on the right before reaching the Ecological Reserve itself. This is where you would pay the fee to go into the ecological reserve and it is behind this building that you want to bird. Broad-billed Tody were very common here.

Make sure you go to the tower over the water treatment plant – it is through a large arch on the right as you walk through the reserve. We saw Ridgway’s Hawk from up the tower.

When you enter the small town of Puerto Escondido, the bright green building on your right is the parks office where you pay your fee (if its open). You then continue straight ahead to a t-junction which has the various routes signed.

To the left is Cabo de Gato – If you drive down here you will come to the Vila Barrancoli on the left. We parked here and walked. It was a productive area late in the afternoon and the spot to get Key West and White-fronted Quail-thrush. Hispaniolan Lizard-Cuckoo, Olive-throated Parakeet, Hispaniolan Euphonia and the more common species were all here.

To the right at the original T-junction was where our guide took us in the morning – I think you really need a guide for this because the spots seemed very specific for Bay-breasted Cuckoo, Flat-billed Vireo, Green-tailed Warbler, Hispaniolan Piculet, Hispaniolan Pewee and both Narrow and Broad-billed Tody.

NOTE: We did not go up to Zapoten that would have given us LaSelle’s Thrush and White-winged Warbler because it is a grueling drive and you really have to stay At Villa Barancolli ( see Tody Tours) and this place is way more basic than we are prepared to do these days.

This is best done with a guide. It is above Perdinales and is in the Sierra de Barahoca national Forest.

If you want to go it alone the road is off the 44 and is a dirt road. Heading west you would turn right from the 44 – the road to the left at this point would take you to Cabo Rojo. Head up to the top of the road to the sign for the National park. Walk the road to the right ( through the official park entrance). As the sun warms the area you can get Hispaniolan Palm-Crow, Hispaniolan Siskin, Hispaniolan Crossbill, Greater Antillean Elaenia, Plain Pigeon, the resident sub-species of Pine Warbler, and Broad-billed Tody along with other migrant warblers.

As you head back down the road, after about 10 minutes keep an eye out for a big open area on the left which will be the old bauxite mine where the Golden Swallows gather.

If you then continue all the way back down, drive under the 44 to head towards Cabo Rojo – keep an eye out on the left about 15 minutes passed the 44 for a lagoon for great views of American Flamingo – the local race of Yellow Warbler is also at this spot.

Cachote
You really need a guide for here – it is only 15km to get up to the top but the road is brutal – 1.5 hours of bumping and definitely a 4×4 required.

Finding the birds at the top requires local knowledge. In addition to the birds listed above we also had Narrow-billed Tody, Black-capped Palm-tanager and some of the migrant warblers.