This was a trip to combine some sight-seeing and to pick up some hard to get life birds. We had a total list of 15 potential life birds and we got 13 of them, so we were pretty happy.

Days 1-4 – We started in Barcelona which obviously wasn’t about the birds but about seeing the city and meeting up with family. It was crazy busy so, while we enjoyed our visit, we were happy to start the birding portion of the trip! 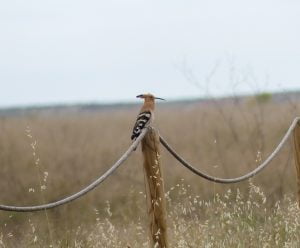 Day 5 – We drove out of Barcelona towards the steppes and a town called Lleida. On the way we headed to Mas de Melons and had a great deal of birds at various random stops along the way, including Eurasian Golden Oriole, Black-eared Wheatear and European bee-eater and picked up our first life bird – Rock Sparrow. Night at Finca Prat

Day 6 – We had 6 targets in this area and started out by driving through the orchards around Lleida towards Timoneda d’Alfies.

There were a fair number of birds in the orchards, including a fabulous Little Owl, and we enjoyed great views of our 2nd lifer – Iberian Green Woodpecker.

When we arrived at Timoneda d’Alfies we were blown away by the number of larks – there were thousands of them everywhere. The majority were Thekla and Crested larks but there were also hundreds of Calandra Lark – which was one of targets. We enjoyed a wonderful time exploring this area with Hoopoes and Corn Buntings and then really lucked out with 2 Great Spotted Cuckoo. We had expected to see more of these but they turned out to be few and far between – we only got one more brief sighting so we sure were lucky to get these ones!

A stop at a spot on Timoneda d’Alfies where there was a river and a grove of trees was very productive. Nightingales were everywhere, there was a family of Iberian Green Woodpeckers with a recently fledged bird on top of a tree stump!, Cirl Bunting, Melodious Warbler, Three-toed Woodcreeper, Serin, Siskin and our target lifer – Western Bonelli’s Warbler. Night at Finca Prat

Day 7 – The next morning we decided to explore the area back over towards Mas de Melons and the village of Alfes. We were hoping for Eurasian Eagle Owl and Greater Short-toed Lark but we dipped on both of them here. Still the area was stunning and we saw plenty of stuff including Black Wheatear so it wasn’t a waste of time. Unfortunately, this whole area has been converted to agricultural land. While it is still quite beautiful, it has really reduced the number of birds in the area. Night at Finca Prat 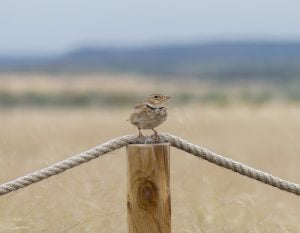 Days 8– We thought we would give Timoneda d’Alfies another try before leaving for the Pyrenees. It was quite cold and the activity was a bit quieter but we were determined and after another couple of hours we finally had wonderful views of a pair of Greater Short-toed Lark. So happy we were successful at last!

Drove up towards a town called Huesco and then on to Larrede to a beautiful hotel from where we could explore some of the higher elevation birds and enjoy the picturesque Pyrenees. Night at Vinas de Larrede

Day 9 – The first morning we had located one of our targets on eBird at Banos de Panticosa which was about one hour away so we decided to check it out. The woods were quite active with Chaffinch, Song Thrush and Crested tit. We were just thinking that we were going to miss out on our target when we came across a flock of about 30 Citril Finch right by the car park. This was a bit of a strange area – felt like the hotels had all been forgotten about but the drive out had been stunning and the birding great.

We decided to continue up into the mountains and drive towards the French border crossing near Formegal. We were hoping for Yellow-billed (Alpine) Chough and Alpine Accentor but this wasn’t our day for those. We did, however get plenty of Linnets, Northern Wheatear, Black Redstart and Common Redstart. Night at Vinas de Larrede

Day 10 – The next day was to be outstanding. We took a packed lunch and drove into Ordessa National Park to do the Cola de Caballo hike into the Valle de Ordessa. Wow, wow, wow! We live in British Columbia, Canada so we know spectacular scenery but this valley was something else. Definitely worth the 20 km return hike AND we got 2 life birds. Great views of Alpine Chough and Rufous-tailed Rock-thrush which was displaying right in front of us! It was really a memorable day – and we were very happy to enjoy a beer in the sunshine when we got back to the hotel. Night at Vinas de Larrede

Day 11 – We only had one target left in the area – Alpine Accentor and we had been told by a friend and his friend who was a guide (thanks Aidan and George!) they could be found at Salto de Roldan which wasn’t that far away. So off we went! However, no-one had mentioned that before you even start walking you are so high that you are looking down on Griffon Vultures!! They also didn’t mention that you had to scale a tall chimney of rock using chains and ladders only to arrive on the top of a very high and very narrow plateau – and I am scared of heights. So, unfortunately, we only got part way up before abandoning this plan! George did also mention afterwards that “Oh yeah, the climb up is a bit sketchy but there might be a couple of birds at the top”:o) 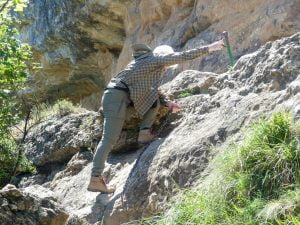 The things we do for life birds!

Then took some time to work our way over to Pamplona. Night at El Toro de Pamplona

On the way back to our hotel we stopped at a great spot for Iberian Chiffchaff and then a second lifer for the day Sub-Alpine Warbler – and a whole family of them! Night at El Toro de Pamplona 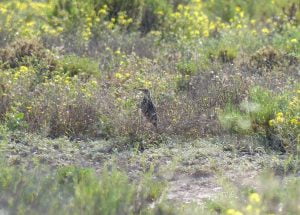 Day 13 – Our second day with our guide was really about Dupont’s Lark which is another tough bird to see – ebird describes them as ‘Fiendishly hard to see’ – they are in thick desert steppe scrub habitat and don’t fly much preferring to run on the ground. We headed for an area near Tudela. Gorka told us that we needed to stay in the car and listen for their call and then try to find them, while staying in the vehicle because they were very skittish. We waited for a while and then heard them. Drove towards them and then spent about an hour staring at exactly where they were calling but without seeing anything!! (except fabulous views of Red-legged Partridge). Just as we were thinking to give up, one appeared and we had wonderful, long views and even managed photos of it, so we were rewarded for our patience.

Next up at some rocks nearby we finally got Eurasian Eagle-owl and more views of Rock Sparrow. 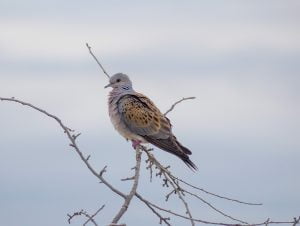 As we had run out of life bird targets, we decided to go over to Pitillas Wetlands and have a look around. It was quite birdy, with all the usual wetland species and the best bird was views of Ortolan Bunting. Night at El Toro de Pamplona

Day 14 & 15 – We left Pamplona and drove to a fantastic hotel in Fuentespalda to spoil ourselves for a couple of days before going on to England. The birding had been great – we only missed out on Alpine Accentor and Eurasian Scops-Owl. Next time! Nights at La Torre del Visco

Barcelona – The Barcelona Edition – OK but over priced

Lleida – Finca Prat – definitely not the luxury hotel it says it is – but probably the best in the area and the food was fantastic.

Pamplona – pretty average but probably the best in the area

www.miruabirds.blogspot.com  – very good – would recommend. He covers the whole country.

Field guide – Birds of Europe – Lars Svensson, Killian Mullarney and Dan Zetterstrom (we also used this app but the bird song is not good.)