Comments: The focus of this trip were the Western Ghat endemics – which require a fair bit of driving and not as much birding as we had hoped. We only missed one that we wanted, so in that way it was a success but not the most enjoyable birding we have ever done (partly because our guide wasn’t interested in showing us anything bu the endemics). In fairness we also didn’t have time to do any ‘touristy’ things which would probably have made it more interesting.

Day 1: We had arrived the night before and driven straight to the Hornbill Tented Camp in Thattekad so were up early enjoying some birding from the restaurant before joining our guide and driving to Urulanthanni N.P. Beautiful park with some great birding – 52 species (16 life birds) before lunch – including Malabar Barbet, Malabar Trogon, Malabar Parakeet, White-bellied Blue Flycatcher, Flame-throated Bulbul and Nilgiri Flowerpecker.

Lunch and a rest and then out to Charupara Park later in the afternoon to wait for Jerdon’s and Savannah Nightjars, both of which we were able to see. Overnight at Thornbill Tented Camp.

Day 2: Took breakfast with us and drove to Idamalayar Park where we walked down the road enjoying a number of new species for the trip. Nice birding looking down into the canopy with good views of Malabar Woodshrike, Malabar Grey Hornbill, Southern Coucal, Rufous Babbler and more. The day was getting hot and the birds slowing so we took lunch with us and drove the 5 hours to Periyar ready to bird the next day. Overnight Wildernest Bed & Breakfast.

Day 3: Drove into Periyar to the Boatland area of the park and picked up a local guide (they provided leech socks although we have our

own!) to walk out into the forest. The forest was very quiet but we enjoyed spectacular views of Great Hornbills and our guide knew where a Sri Lankan Frogmouth was roosting – which was fabulous. We also found White-bellied Treepie here and Malabar Whistling Thrush which were both on our list. There was also a large lake for Woolly-necked Stork and some wagtails.

A lazy lunch ( taking advantge of the Spice Village Hotel next ot the Wildnernest) and then another local guide that took us around the Anchuruli part of the park for some great species. He really knew his stuff and got us great view of Red Spurfowl, Wynaard Laughingthrush, Indian Scimitar Babble. On the way back he knew the exact spot for Indian Pitta and we had amazing views of this bird!! Night at Wildnernest.

Day 4: Drove down into Tamil Nadu province for about 2 hours ( which covered 60kms!) and then stopped beside the road on a hillside in the middle fo nowhere. Out of the car and right there were Yellow-throated Bulbuls – fantastic! Also had Yellow-billed Babbler and White-browed Bulbul, Purple Sunbird and Bonnelli’s Eagle.

Then a long drive through beautiful tea plantations up to Munnar and the Olive Brook Guesthouse.

After a wonderful lunch we walked up the hill past several abandoned hotels to find Black & Orange Flycatcher (which we found!) and also for Nigiri Woodpigeon, Nilgiri Flycatcher, Kerala, Laughingthrush, Pale-billed Flowerpecker and Tytler’s Leaf Warbler. Then to our amazement a family of Painted Bush Quails crossed the path and stayed in view as they clambered over some rocks – you can’t plan that!.

Day 5: Drove to Eravikulam National Park and waited in line (!) to buy tickets and ride the bus up into the park. The park is a reserve for the Nilgiri Tahr ( a type of mountain goat) and is popular with local people. It is also the best place to see Nilgiri Pipit and White-bellied Shortwing – both of which we enjoyed.

An afternoon walk just beyond the entrance to park provided 4 new species for the trip including 2 life birds for us – Western Crowned Warbler and Indian Blackbird.

A cooking class before dinner at the hotel was a nice way to finish the day. Night at Olive Brook Guesthouse.

Day 6: Our final destination today was Ooty in the north but we started by driving to Chinnar Park – which was very beautiful. A couple of stops provided 8 new birds for the trip and 2 life birds – Purple-rumped Sunbird and Tickell’s Blue Flycatcher.

After a stop for lunch we continued on towards Ooty but, before winding our way up the hill to the town we saw Jerdon’s Bushlark and

Steppe Buzzard – both life birds for us. Once in the town we drove up to a very congested look-out spot ( filled with people, sales people and garbage!) to find one of Southern India’s rarest birds – the Nilgiri Laughingthrush. Much to our amazement it was there – in the midst of all the noise and chaos!

Day 7: Very glad to leave Ooty – and started heading up towards Mudumalai Park. The drive produced some great stops – the first of which gave us Paddyfield Pipt, Malabar Lark, Syke’s Warbler & White-naped Woodpecker. Then it was onto the park to try for Grey-headed Bulbul – no luck! 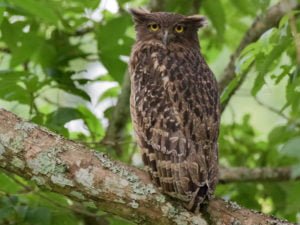 Headed to the Jungle Hut for lunch and then tried again in the afternoon for the Bulbul – still no luck – this was to be the only bird we missed!! Did get Blue-faced Malkoha and Bay-backed Shrike though so it was still great.

Tried an evening safari for some of the larger wildlife – saw elephant (a little too close!), Sloth Bear and Civet Cat but no Leopard unfortunately. The main reason we had gone was because our guide new where Brown Fish-owl were roosting so we were able to finish our trip with another life bird!

Guides: We booked through Indian Footprints who did, we later discovered, just sub-contracted to Kalypso Adventures – the guide wasn’t great – he was only interested in getting the endemics and NOTHING else and he had no interest in our comfort.