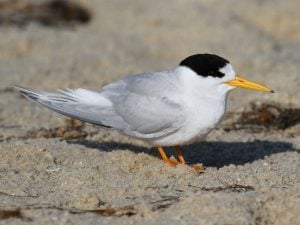 Day 1: We flew into Auckland from Sydney and drove immediately to the beach at Waipu to start our bird list. It was fabulous – giving us 24 species and 5 life birds – Variable Oystercatcher, Banded Dotterel, New Zealand Dotterel, Black-billed Gull and our main target Fairy Tern.

It was getting late by the time we dragged ourselves away so we drove back down to Orewa to our motel – The Waves – and enjoyed a great meal in town and a good sleep.

Day 2: Caught the ferry over to Tiritiri for a great day’s birding. What an amazing place – but there is no food there so take your own. The life birds started from the ferry with White-fronted Tern & Red-billed Gull and then just grew from there. While we were listening to the naturalist talking on the island there were Tuis, Red-crowned Parakeet and NI Saddleback flying around us – and the day continued with an additional 12 life birds – Kokako, Stitchbird, Bellbird, NI Robin, Whitehead, Fernbird, NZ Fantail, NZ Pigeon, Takahe, Brown Quail and Brown Teale. We were in heaven! Back to the Waves Motel and another nice dinner in town.

Day 3: Today we were focusing on the Miranda Shorebird Centre but with high tide at about 4pm we decided to try Whangamarino Wetland

for Australian Bittern. Unfortunately we were not successful but we did get to enjoy many of the ‘British imports’ with wonderful views of Yellowhammers and Greenfinch. Then it was off to Miranda for a wonderful couple of hours shore birding.

Our target species was Wrybill – which we got in a matter of minutes – but we were also able to enjoy Sharp-tailed and Pectoral Sandpipers, Pied oystercatcher, Red-necked Stint and a life bird, NZ Pipit. With a 2 hour drive to Rotarua we left around 5 pm. Stayed at BK’s Motor Lodge and had dinner on Eat Street in town.

Days 4: Heading up to Pureora we came across a great reservoir at Whakamaru (also a great little cafe just further on) where we got our first looks at Paradise Shelduck, NZ Scaup and Little Black Shag. Then onto Pureora to walk the Totara Track where we found Kaka and Grey Warbler. The track near the Tower was great for Riflemen and Tomtit – but we had also be told that Long-tailed Cuckoo and NZ Falcon were there – we didn’t see either but we did have Long tailed Cuckoo calling within about 10 feet of us behind a bush and we could not see it – and it was one of the calls that was not on the playback we had purchased – very frustrating!!! Although spectacular views of about 5 Shining Cuckoos made up for it.

Drove on down to Turangi – checked out one of the spots for Blue Duck on the way ( no luck) so drove on to a nice B&B, Founders. although we had a terrible meal at an Italian restaurant in town.)

Day 5: We had been given great directions for Blue Duck at Red Hut Pools, just south of town, so we drove there after breakfast. We couldn’t believe the accuracy of the directions because it was sitting in the middle of the river right where it was supposed to be – fantastic!

Feeling lucky, we decided to have another go for Bittern by the Old Wharf in Tokaarua – we had also been told this was good for Spotless Crake. It was a bit late in the morning really and apparently we had used up all our luck because neither of them were there! Thousands of Black Swans and a number of NZ Grebe made up for it.

Drove though Taupo and on to Napier in the afternoon to bird with Sav (the guide that had helped us with our itinerary). We hit some pools outside Napier for wonderful views of Black-fronted and Banded Dotterel and also found Royal Spoonbill and Caspian Tern. Enjoyed a lovely evening with Sav and his wife and stayed at the Wine Country Motor Lodge.

Days 6: Not much on the birding front today. We drove across the island to check out Manawatu Estuary at Foxton Beach – but there was nothing new there for us so we kept going on into Wellington. Enjoyed an evening on Cuba Street and stayed at the Novotel.

Day 7: Caught the early morning ferry over to Picton – all very easy (although you have to leave your rental car on the north island and then pick up a new one on the south island which is a bit of a fiddle) and found the people we were going out with in the afternoon, Dolphinwatch, about 100 yards from the ferry.

A lovely boat trip out to a small island gave us 3 life birds King Shag, Weka and Buller’s Shearwater. We landed on a reserve island and wandered around for an hour – enjoying Yellow-fronted Parakeet and SI Saddleback – there were also still a few Little Blue Penguins in their nesting boxes. With a couple of hours drive to Kaikoura we left as soon as we disembarked and got to the Kaikoura Boutique Hotel in time to have a nice dinner in town.

Day  8:The day my husband has been waiting for! Kaikoura Pelagic – and wow!. Went off in the morning on quite a small boat with only four guests (great!!) and before we had left the dock we had life birds flying around us – Giant Northern Petrel – and it only got better. Northern and Southern Royal , NZ White Capped, Salvins, Black-browed, and Wandering Albatross all flew by and sat beside us – only feet from where we were standng. Westland, Cape and White-chinned Petrels and Hutton’s Shearwater. Wow!

and we had another life bird for the day. We wanted to make a little headway towards Lake Tekapo so we didn’t have so much to drive

tomorrow so worked our way to Ashburton with a few stops on the way. Commodore Motor Lodge.

Day 9: Drove up to Lake Tekapo- keeping an eye out for NZ Falcon, which continued to elude us. Enjoyed lunch up at the Observatory overlooking Lake Tekapo which is absolutely stunning! Had a quick look for Black Stilt but decided to leave that until tomorrow and enjoy a lazy afternoon catching up on emails. Lake Tekapo Scenic Resort.

Day 10: Today was all about Black Stilt. We had been told about a spot up near Glentanner

Airport where we could get distant views so we decided to check it out. Even with our scope they were quite a distance but at least we had managed to find them. We continued to check out various other spots between Tekapo and Wanaka but never located any others!! Did manage to get Black-fronted Tern though so that was good. Wanaka View Hotel.

Day 11: This has been one of the most restful birding trips we have ever done! Because there are not hundreds of species we were able to target the endemics without birding 24/7. Today we relaxed in the morning and then drove through stunning scenery to Te Anau. Still trying for the elusive NZ Falcon and still not successful! The Radford Lakeview was wonderful so we took advantage of our accommodation and enjoyed an nice evening.

Day 12: We got up early and drove up to the Homer Tunnel. We had been told it was a good spot for Rock Wren. It was very wet and windy

but we persevered. After about 90 minutes we were about to give up and go back to the car when one appeared out of nowhere and spent quite some time hoping around beside the path, providing great views – which we really felt we had earned. We had also been told that we should see Kea in the car park but they were nowhere to be seen today.

We drove back down, stopping in a couple of lovely spots along the way – found SI Robin and Tomtit but what we were really hoping for was Yellowhead – but to no avail. Enjoyed another night at the Radford Lakeview.

Day 13: We were booked on a boat trip in Milford Sound. The weather was truly awful but we decided to go for it anyway. As we drove through the Homer Tunnel there was a Kea sitting on a pull-out beside the road. What great luck! It walked over to our car an offered great views even in the pouring rain. That was pretty much all we saw all day because of the weather. Radford Lakeview Motel.

Day 14: Left Te Anau and drove down to Bluff to catch the ferry over to Stewart Island. There were many birds on the way across but the sea was quite rough and it was almost impossible to see anything clearly.

We checked into the May Motel and wandered round the village ( it is tiny!) Then had dinner and prepared to head out Kiwi spotting. It was a real adventure – out on the beach in the dark, we were getting a bit nervous that we were going to miss out but then one wandered out, totally obvious to us and we spent ages watching it in wonder! Back at the Bay Motel around 1 am.

Day 15: Despite a very late night last night we got up early to go with Matt Jones over to Ulva Island.- our target here was Yellowhead – which we succeeded in seeing and it was a lovely morning walk.

We were then picked up from Ulva Island by Aurora Charters and spent the afternoon on yet another great pelagic tour. Buller’s Albatross,

Common Diving Petrel, Grey-backed and White Faced Storm Petrel, Fairy Prion, Yellow-eyed Penguin and Stewart Island Shag were all new for us. The boat was wonderful and it was a

Day 16: Decided to fly up to Christchurch from Invercargil rather than driving. So we dropped our car off and enjoyed two days at The George in Christchurch – which was lovely.

Guides – We didn’t use guides on this trip as it is an easy self drive and the number of species is quite small – making ID pretty easy.

We did find a great guy who helped us with our itinerary and gave us up to the minute locations on some of the trickier species. They also do guided tours – definitely worth checking out. We spent a day with him ( and his wife) and thought they were great, well apart from him being a Tottenham supporter!! Sav Saville – Wrybill tours

BirdingPals is always a great resource for free and professional guides.

Bird Song – New Zealand Bird calls – Lynnette & Geoff Moon. ( this is rather limited – the obvious species missing is the Long-tailed Cuckoo but there are a couple of others as well so you can download those from Xeno-Canto by clicking on the catalogue number.)